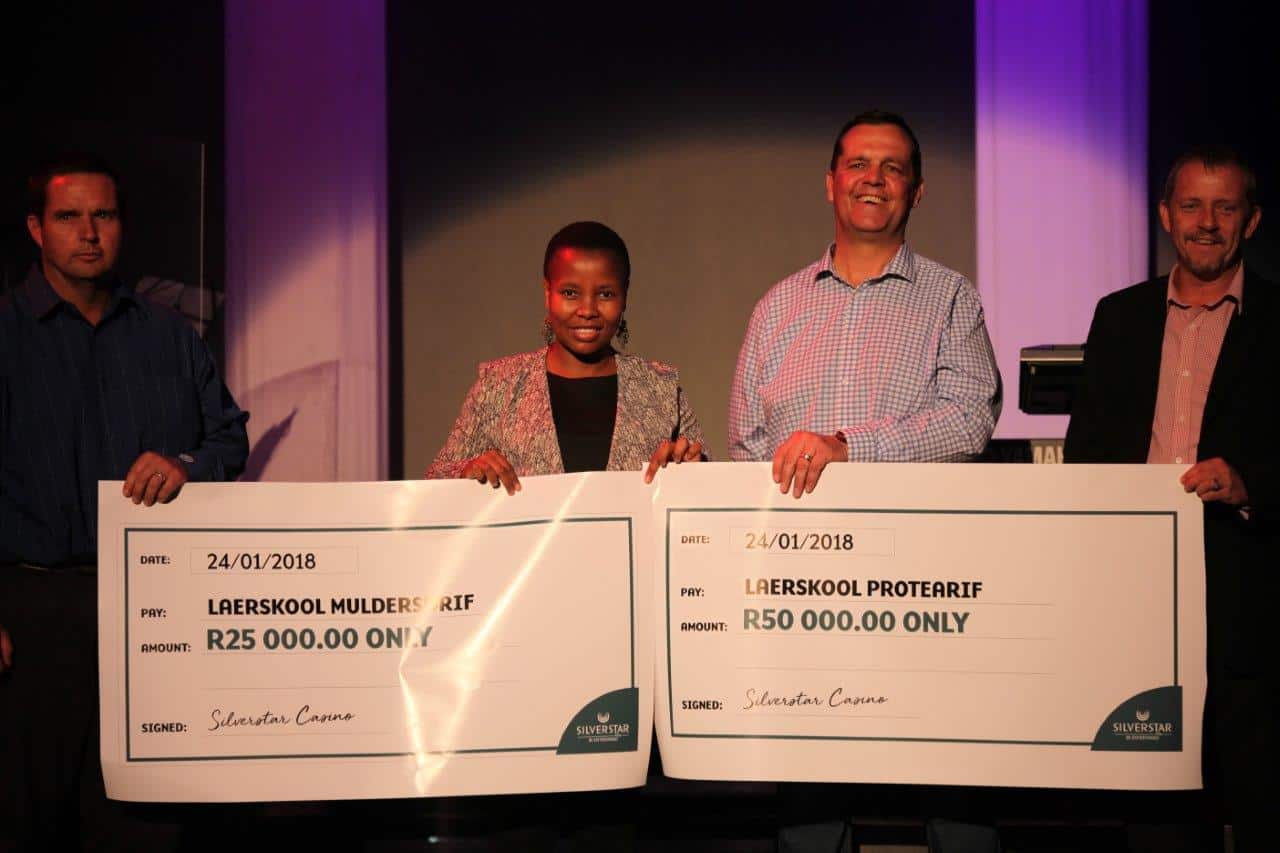 Schools repaired and back in business – after the storm

When a tornado ripped through Krugersdorp on 9 October 2017, it left local schools heavily battered and facing millions of rands worth of damage. Over the past three months, with the help of local government and donors, two of the primary schools – Protearif and Muldersdrift – worked hard to be ready to welcome the 2018 intake.

On 24 January, the schools hosted a ‘thank you’ event for the sponsors who contributed to their restoration at the Barnyard Theatre in Tsogo Sun’s Silverstar entertainment destination. Silverstar was one of the donors who joined the efforts to repair the damage at the schools.

Anneke Potgieter, GM and Operations Director of Silverstar, says the precinct itself also suffered damage in the tornado and determined to support the embattled schools. At the thank you event, Silverstar handed over cheques to the total value of R75,000 – R50,000 to Protearif and R25 000 to Muldersdrift – to the school principals, to serve as top-up funds to cover any shortfall in the repair costs.

“Silverstar has been part of the Krugersdorp community for 10 years and it has always been part of our ethos to uplift and take care of our community,” says Potgieter. “We are highly community-focused, and recognised the major challenges the schools faced in recovering from the storm. As a stakeholder in the community, we wanted to contribute towards the reparation projects. We wish the schools all the best for a highly successful 2018.”

This initiative by Silverstar dovetails perfectly with Tsogo Sun’s wider group CSI focus on education, which impacts more than 35 000 children and youth around the country annually.

Donna Lourens, headmaster of Protearif Primary, says that the school suffered extensive damage in the storm, which thankfully happened after most learners and staff had gone home. A few aftercare children and four teachers were on the premises at the time, but there were no injuries. “Repairs were largely undertaken during the summer break, and we were able to open at the start of the school year with most of the work done. However, building costs are extremely high and only part of the repairs were covered by insurance and emergency funds. The top-up funds from Silverstar and the support from other businesses and organisations in the community have been a tremendous help in ensuring we were able to open this year – without it things would have been extremely difficult for all our learners and staff. We consider ourselves extremely fortunate to be a part of such a caring community.”

Adds Potgieter, “Schools are vital in the fabric of our society, protecting our children and preparing them for successful and bright futures. It makes sense to contribute to the lives of the future leaders of this country.”

Also as part of the wider Tsogo Sun tornado community relief efforts, several properties responded to the needs and a large amount of blankets, linen, mattresses, towels, pillows, chairs, crockery and cutlery, and other sundry items were donated, which were handed over to the West Rand Disaster Management team for distribution once homes and shacks had been rebuilt, and to a church in Munsieville that had suffered damage and loss.