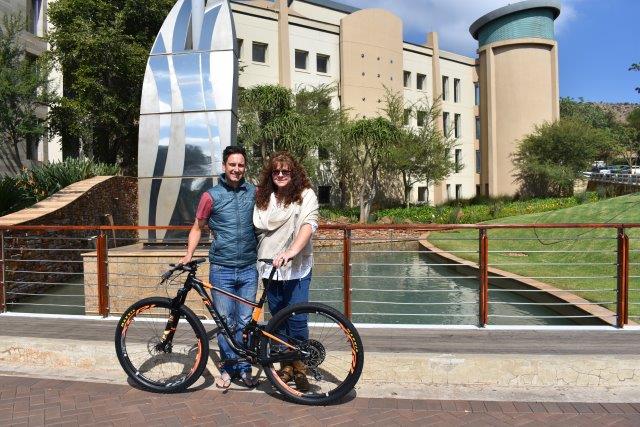 Silverstar’s R150,000 bike boosts Good Morning Angels funds Silverstar Casino became the brief but proud owner of a R150,000 bicycle in the Jacaranda FM Miles for a Million initiative to raise funds for the radio station’s Good Morning Angels community outreach programme. Miles for a Million involved three intrepid cyclists – Hendrik Steytler, Deon Brink, and Ivan Potgieter – braving the elements and taking on a 1,700km nine-day fundraising ride from Cape Town to Gauteng, visiting many off the beaten track places along the way. The gruelling ride ended on Saturday 13 April at the Big Red Barn in Irene and the million rand target was reached – and then exceeded during the Breakfast with Martin Bester show on 15 April. Silverstar, the West Rand’s favourite entertainment destination and a past supporter of Good Morning Angels initiatives, heard the call for funds and responded with a R150,000 contribution that officially ‘bought’ Hendrik Steytler’s Giant bicycle – and then gave it back to him. Adele Wilson, Silverstar’s CSI Manager, says, “The bravery and determination of the cyclists, as well as the excellent work done by Good Morning Angels, inspired our contribution that in fact was put towards buying Hendrik’s bike for him, sponsored by Giant for the ride. The donation will also boost the Good Morning Angels funds that are used to make a real difference to people in need.” Get Social: Be the first to know the latest Silverstar news on Facebook @SilverstarZA or follow us on Twitter @SilverstarZA #LoveSilverstar