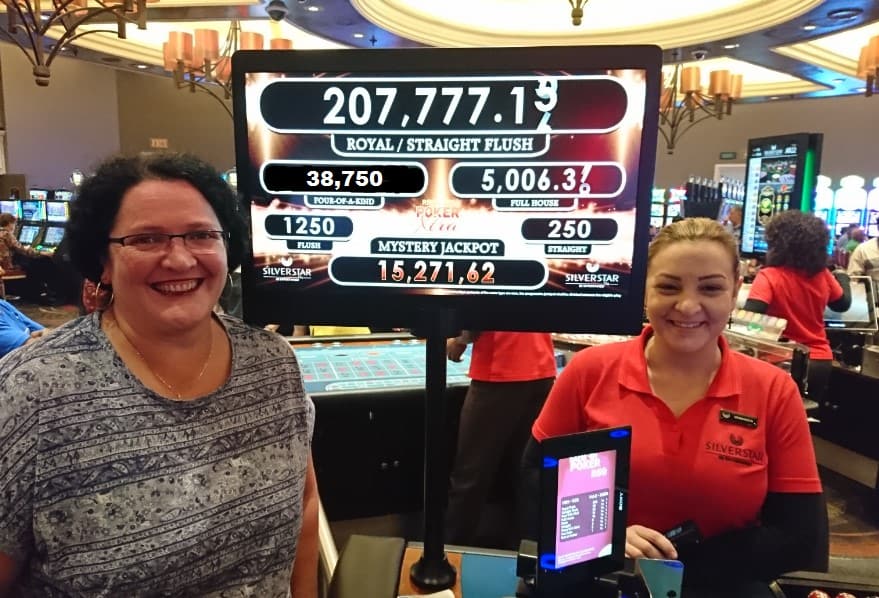 Silverstar, the West Rand’s premier entertainment destination, has made many of our guests winners on our gaming floor in the last month in a multitude of spectacular gaming promotions.

The Winning Never Stops at Silverstar:

Silverstar’s Cash & Cars promo came to a stellar close as Johan Oosthuizen drove away in a brand-new Audi A3 S-line which also had an additional R5,001 in cash stashed neatly in the boot.

Maria du Toit won an electrifying R38 750 with her four of a kind hand on the Poker tables, while Catrina Davids pocketed herself a staggering R213,525 with a straight flush win. The straight flush trend continued when Corny van der Merwe went home with R113 090.98. Big Bang Perfect Black Jack master, Michael de Bruyn stole the show when he secured R11 928.12 leaving the casino floor with a smile on his face.

Slots players weren’t left wanting either…Marius Bothman hit the jackpot and took home R71,882.50, while Ragel Bothe’s jackpot win bagged her a jaw-dropping R212,175. Frederick Els had a lucky night and hit the R300,150 jackpot. Ritesh Mothiram, however, outshone them all when he hit the jackpot and secured himself a R358,000 cash pay-out.

Want to see your name added to the list of winners? The casino floor is the place to make that happen!

Bingo Jackpot Just One Call Away:

Bingo (https://www.tsogosun.com/silverstar-casino/whats-on-silverstar/gaming/bingo) at Silverstar has been heating up the casino floor since it launched. The jackpot has rolled over and now stands at over R40,000, your chance to win big is just one call away. Get your Bingo tickets for only R10 each at the Silverstar Cash Desk from 12h00 every Monday. Bingo Mondays take place every week from 6pm.

Last Chance to Get In It To Win It:

The final draw in our current gaming promotion, In It To Win It (https://www.tsogosun.com/silverstar-casino/whats-on-silverstar/gaming/in-it-to-win-it) which launched in April, takes place on 2 June 2018. Throughout this promotion, a share of over R1.6-million in cash, cars (no less than SIX Opel Adams) and prizes were up for grabs by Silverstar Rewards Cardholders. You still have time to earn the points you need to qualify for a ticket in the draw for the remaining prizes, so get down to Silverstar and get In It To Win It!

Time to Level Up:

Ever wondered what the benefits are of levelling up as a Rewards Cardholder? In addition to bigger discounts on movie tickets, spa treatments and dining options, you’ll also enjoy discounted event ticket prices and exclusive rates at participating Tsogo Sun hotels.

What makes being a Rewards Cardholder even more exciting are the gaming promotions which are exclusive to Black Rewards Cardholders such as High Rollers (https://www.tsogosun.com/silverstar-casino/whats-on-silverstar/gaming/high-rollers-2018), in which one lucky cardholder will drive away in a luxury car. At the start of this promo, a mystery car made its way onto the casino floor. As one of Silverstar’s most mysterious gaming promotions to date, the big reveal was held on Thursday, 26 April to announce the next phase of High Rollers, where R55,000 was won in the draw that night. Three beautiful Mercedes Benz cars were revealed, and guests are now voting for their most preferred car. The car with the most votes will be revealed, which guests will then play for and stand a chance to win at the final High Rollers draw. The three car options being voted on are:

On Friday, 29 June at the Silverstar Centre, a glitzy cocktail party will be held, and all will be revealed at the final draw for the grand prize – a Mercedes X Class, one of the first in South Africa! For more information about exclusive Black Rewards Cardholder benefits and High Rollers.