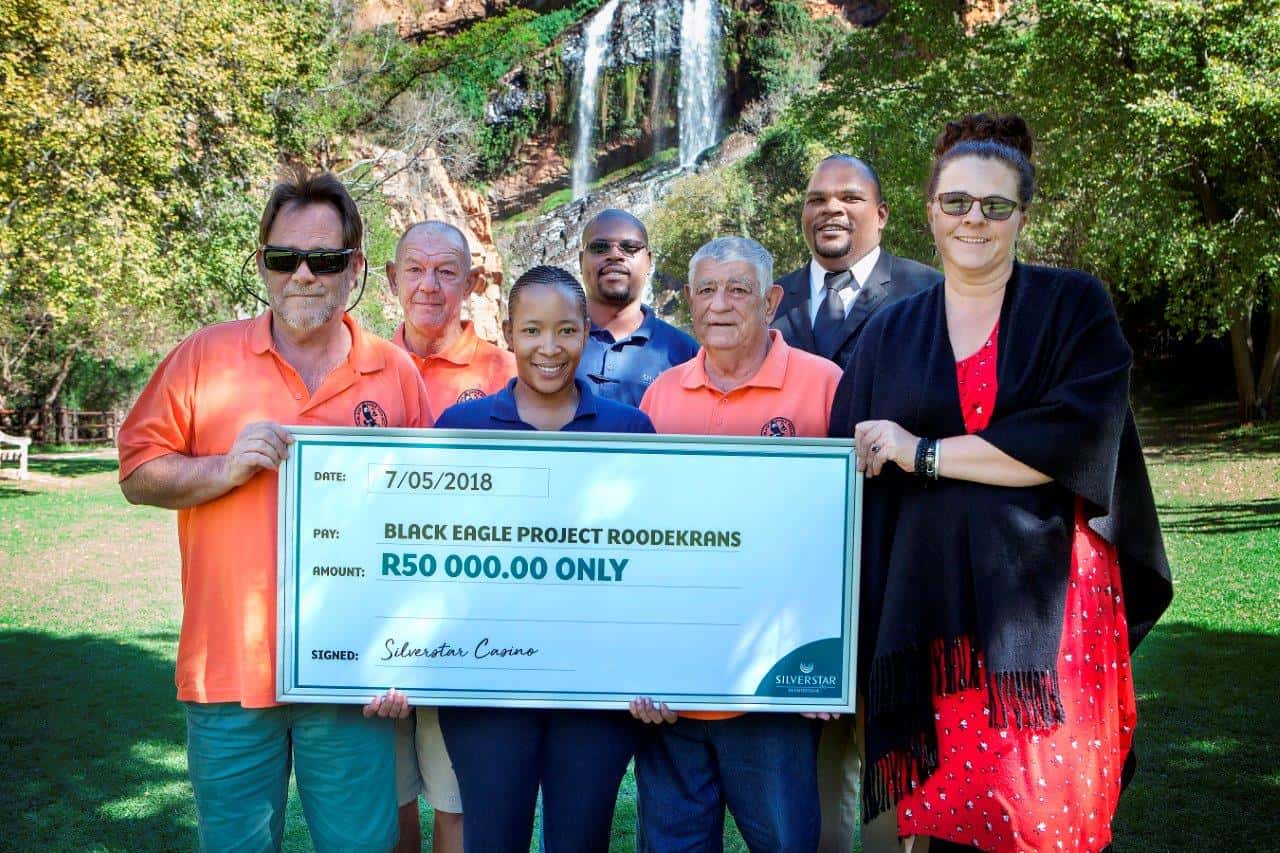 Says Anneke Potgieter, Director of Operations and Complex General Manager at Silverstar: “This R50,000 donation includes funds collected from the Silverstar fountains, which were then matched and topped up with funds from our CSI budget”.

The Black Eagle Project team has unofficially been monitoring the birds since 1988 and the project was formalized in 1992. Says Gerald Draper, Chairperson of the Black Eagle Project Roodekrans: “The project is run by a group of approximately 30 volunteers with eight official committee members, who monitor the eagles on public holidays and weekends. The objectives of the project are to take all necessary steps to conserve, protect and maintain the Black Eagles in the Walter Sisulu National Botanical Garden for future generations. By monitoring and obtaining information, we are able to educate and share with the public information on their breeding cycle.”

Since the 1940’s, there have been a few generations of Black Eagles nesting in the Botanical Gardens. Among them are the grand old lady, Emonyeni – whose name means upon the wind and is likely more than 40 years old – her life cycles were followed by many with great interest. The first sightings of Emonyeni were as far back as the early 1970s with her first mate. Quatele (“the cross one”) was her second mate and she scoured the ridges searching for him when he disappeared in 1998. His distinctive over-hanging eye brow made him look fierce resulting in his name. Emonyeni patiently taught her third mate Thulane (“the shy one”) everything she knew when this small male barely in his first year of adulthood arrived. Sadly in 2016, Emonyeni disappeared. There are various theories about her disappearance, one of which includes a romantic love story of her becoming too old so she flew off to find a beautiful young partner for Thulane. The new female was approximately three to four years old but not a breeding adult yet. She was named Makatsa meaning “an unexpected surprise”.

In 2017, Makatsa built her own nest further back from the waterfall. She and Thulane raised their first chick, named Ayanda, meaning “new addition to the family”. Ayanda stayed until 23 December 2017, after which she left her parents’ territory but nobody knows where she has made her new home. Most eagles find shelter in the Magaliesberg area, there are quite a few breeding pairs in that area.

In 2018 Makatsa revisited Emonyeni’s nest, closer to the waterfall, which has been there for almost 70 years. This excited The Black Eagle Project team as this nest was under surveillance with an online camera. They could monitor their every move, from nest refurbishment, eggs being laid, incubation, hatching, meal times and fledging of the young birds. While Makatsa was busy refurbishing this nest for the new breeding season, it was sadly washed away by the waterfall which was in flood due to the heavy rainfalls we had in March. She then returned to her nest which she had built the previous year. Not having a camera monitoring them, the team have to rely on the eagle’s behaviour. Based on this, they believe that Makatsa laid her first egg on 4May 2018, which should hatch on Youth Day 2018.

Draper concludes: “The R50,000 donation received from Silverstar will be used to move the camera to Makatsa’s nest. This will however only be done after a feasibility study and after breeding season, which is between December and February 2019.”